GERARD can be built into the cargo area of most common pick ups and trucks. Omega Infra has its own garage for final assembly of GERARD on any choice of truck or van. Please consult us on the type and model of the truck you prefer. We can also quote you for a pick-up truck already equipped with GERARD.

GERARD is designed and developed for creating a safer and better working environment for the road workers. In this process other features and benefits that are applied with road work situations, have been taken into account. Our semi-automatic traffic cone handler provides not only a safe solution for the road construction worker, but from an ergonomically point of view, also provides a huge improvement over the current situation. The Dutch company: BAM Road working technology, has given major input during the course of designing and developing of GERARD. Much to their satisfaction, BAM has deployed our traffic cone handler at several road work demarcation jobs.

The road worker no longer hangs outside the vehicle to place or collect traffic cones, which makes the road worker less vulnerable for traffic racing by. When exceeding a speed of 25 km/hr the arm is placed back to top position automatically, for safety reasons.

The road worker no longer sits on his knees stretched out with a heavy cone in hand, but is able to stand in a physically less burdening position. The road worker only needs to place the cones on the standard, which automatically moves back and forth.

GERARD is easy to fold, as a result of which the loading space of the vehicle can be used for other purposes as well. Preparation time requires but half a minute, which makes it very user-friendly and efficient.

The distance between the cones is adjustable from 7 to 70 meters at a speed of approximately 22 km/hour. Of course turns are not a problem for GERARD. 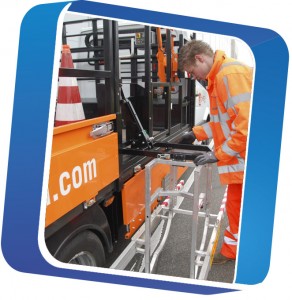